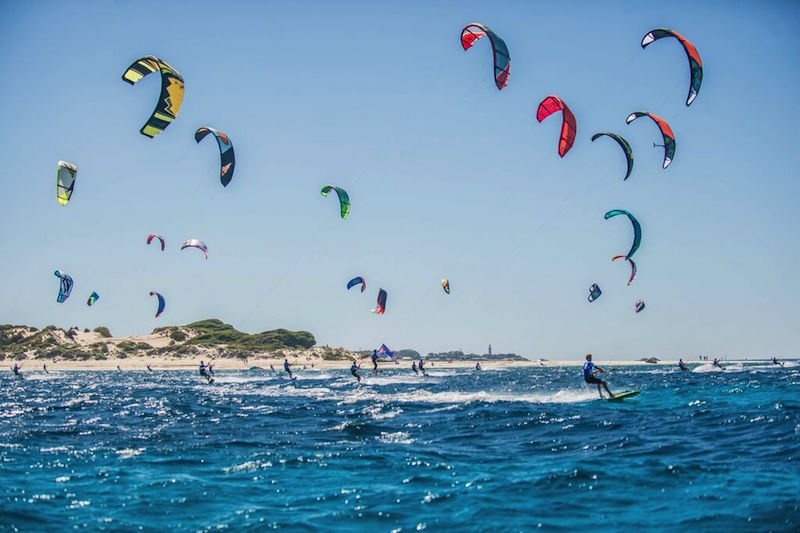 Western Australia: The Red Bull Lighthouse to Leighton kiteboard race returns for its sixth year in December and entries are now open to experienced kite racers from around the world.
Entries are by ballot, as only 115 places are available and demand to race across the Gage Roads channel from Rottnest Island to Fremantle’s Leighton Beach continues to grow.
The 2015 edition of the Race will be held on Saturday 5 December and last year’s winner 18-year-old Olly Bridge from Devon UK, who set a race record of just 22 minutes seven seconds, has confirmed he’ll be returning to defend his title. Olly is currently the three-time European Champion.
Olly’s mum Steph Bridge, 43, a previous World Champion, finished fastest female in the 2014 Red Bull Lighthouse to Leighton, and is also returning to defend her title.
The 19km race starts from the pristine waters of Rottnest Island’s Phillip Point.
Event Director and keen kiteboard racer Tim Turner said there were many drawcards for the race.
“The chance to claim you have been the fastest racer across the ocean from iconic Rottnest Island to the West Australian mainland combined with the attractive $8950 prizemoney $4000 of unique trophies, and the bragging rights of actually achieving the crossing combine to make the race highly desirable for keen kiteboarders,” he said.
The Red Bull Lighthouse to Leighton has equal prizemoney for fastest male and female (the first race to do so) plus the respected Marc Sprod Trophy for the fastest West Australian competitor, won last year by past race winner Jonathan Keys from Mosman Park.
The Red Bull Lighthouse to Leighton is made possible thanks to Tourism Western Australia and Red Bull, and is also supported by the Fremantle Sailing Club, WAKSA, Rottnest Express, Kite Addiction, Cabrinha Kites and Channel 9 Perth.
For event information visit http://www.lighthouse2leighton.com.au
Vorheriger Artikel WANTED: Der beste Wassersport–Clip Alle Beiträge Nächster Artikel It's more fun in the philippines