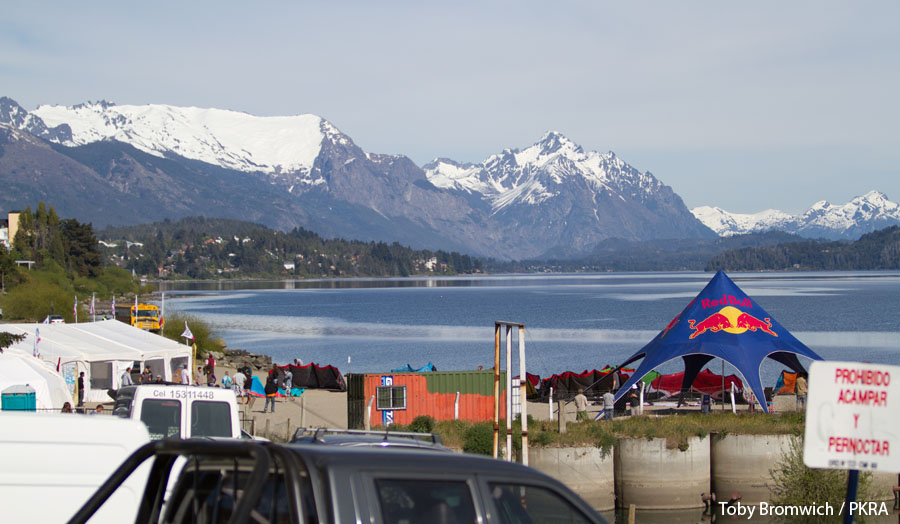 The town of San Carlos de Bariloche welcomed competitors from all over the world today as the highly anticipated PKRA tour stop finally made its debut after months of preparation and organization.

Located at the foot of the Andes Mountains, Bariloche is a small enchanting town surrounded by hills, woods and mountaintops covered with snow. The crystal clear water lake, soaring mountains and stunning glaciers are enough to mesmerize anyone who visits this place.

Racers as well as Freestylers spent most of the day taking advantage of the beautiful weather and picturesque views while anticipating the wind. The weather forecast was a bit unpredictable today, however at 4:00pm the wind began to pick up in strength and racers prepared for what would be a 4:30pm start. Freestyles were released for the day and a total of two races have been completed.

A few racers struggled with the frigid 8°C water temperature and were not able to finish the first race of the day, however that did not stop Californian sunny boy John Heineken (Ozone, USA) who finished with a huge lead in both races today. In a brief interview with Heineken he stated that the choppy water, and overall conditions made him feel “just like home” and effortlessly gained a lengthy distance from the other competitors who seemed to be struggling more so than Heineken. French rider Olivier Dansin (North, FRA) managed to take second place in the first race of the day while Julien Kerneur (Takoon, FRA) came in third. In the second race of the day, Kerneur finished in second place while Dansin followed closely behind in third.

Local Argentine and PKRA legend, Martin Vari (Vari Kites, ARG) struggled in the first race of the day. Vari stated; “I crashed then accidentally cut a large whole in my wetsuit with one of my fins, I had to drag myself back to shore”. Vari managed to finish nicely in 6th place in the second race of the day. It was just a little warm up for what is to come in the following days here in Bariloche as the forecast is looking brilliant.

In the women’s division, French rider Caroline Adrien (Cabrinha, FRA) was no stranger to the cold water finishing first in both races today. Brazilian rider Nayara Licarinoo (North, BRA) finished second in both races followed by Kari Schibevaag (Ozone, NOR) who came in third in the first race of the day while Melissa Gil (Cabrinha, CRC) finished in fourth. In the second race of the day, Gil overtook Schibevaag earning her third place in the second race while Schibevaag struggled to finish in fourth place.

Tomorrow’s mandatory skippers meeting is scheduled for 10:00am with a first possible start for Freestyle at 10:30am and Racing at 11:00am.

The Kitesurf World Cup Bariloche 2010 is made possible and supported in part by the Tourism of Argentina and Red Bull.